Our users have installed wattvision sensors at their homes around North America, and all have shared in the eye-opening experience of seeing that initial live view of their home's energy use. Most of the time, users are surprised by what they find.

Case in point: Rhonda, from Matthews, North Carolina, who kindly let us share her story here.

A few days after setting up wattvision, Rhonda pointed out that she was seeing regular spikes in her graph.  She suspected interference or some other error with the wattvision system.  Here's the screenshot she sent us, with the comment, "It is not due to my actual use of energy." 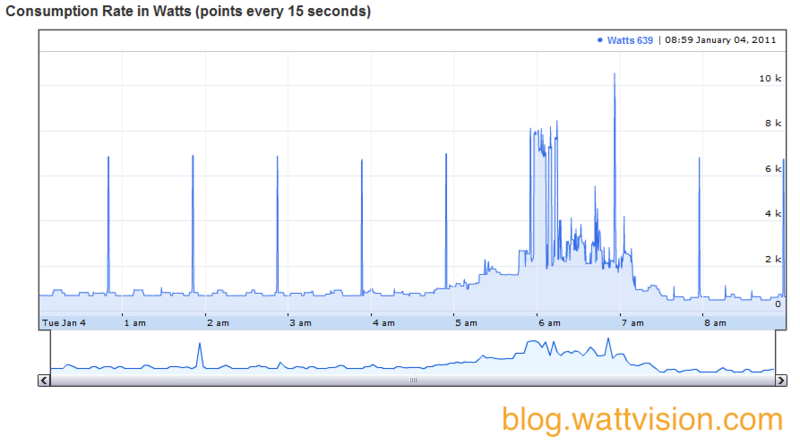 We had never seen a spike like this before, so we were initially surprised.  Wattvision is hardened against interference, and none of our existing users reported anything like this.  But we couldn't rule it out.  At the same time, we felt the regularity and behavior of the spike -- about 6 kilowatts, and about a minute long every 62 minutes or so, indicated that it was an actual load running at Rhonda's house. Some enormous, mysterious, 6-kilowatt load, approximately every hour for a minute.  What was it?

To determine whether it was interference, you first need to know something about wattvision.  In Rhonda's case, wattvision picks up an infrared pulse from her digital electricity meter every 1-watthour of use. If electromagnetic interference were producing this 6kw spike in her energy use, it would show up, even if the pulse from her meter were temporarily blocked.  If the spike did not appear on the graph, we'd know that our system was good, and that the mysterious spike was actually being produced by the meter, implying an actual load.

While we devised this test, Rhonda had come up with a test of her own. She realized that the only load in her house that could possibly be so large was her hot tub.  So she decided to cut the breaker to her hot tub as an additional experiment.

Rhonda tried both experiments.  She blocked the infrared pulse on her meter.  The spike did not appear on her graph -- interference was not an issue.  After cutting the breaker to her hot tub, the spike disappeared.  To Rhonda's surprise and our relief, the hot tub was the culprit -- it was in an "anti-freeze" mode, running every hour to keep the water just warm enough to avoid freezing.

What mystery loads have you discovered at your house? Tell us about them in the comments, or get a wattvision system for your house!