Some of our customers have used Wattvision to uncover errors made by their power company.  In the case of Mr. Chang, he found more than one.  Mr. Chang recently installed solar panels, but he didn’t see a big difference in his electricity bill.  Were his solar panels actually working?  Was his system wired correctly?  He purchased Wattvision to see what was going on.

After he set up the system, Mr. Chang emailed us and wrote, “I’m trying to figure out if I’ve installed the [Wattvision] device correctly or if my meter is not configured correctly.”

We confirmed that Wattvision was set up correctly (it’s quite straightforward) so he spent some time gathering data about his energy use from Wattvision.

He decided to set up an experiment -- he’d turn everything off and leave home on a perfect day for solar energy. His solar panels would produce power and send it back to the grid.  The Wattvision sensor, connected to his power company's electricity meter, should show that no power came from the PowerCo to his house.  On a sunny day last March, he left home for the entire day and made sure everything was off.  What did he discover when he came home?

He drew the following conclusions, taken directly from the presentation he sent to his power company (PowerCo):

After Mr. Chang sent the power company a slide deck with these conclusions and supporting data, they jumped to action, set up a brand new net-meter, and refunded Mr. Chang for the power he had produced to date. 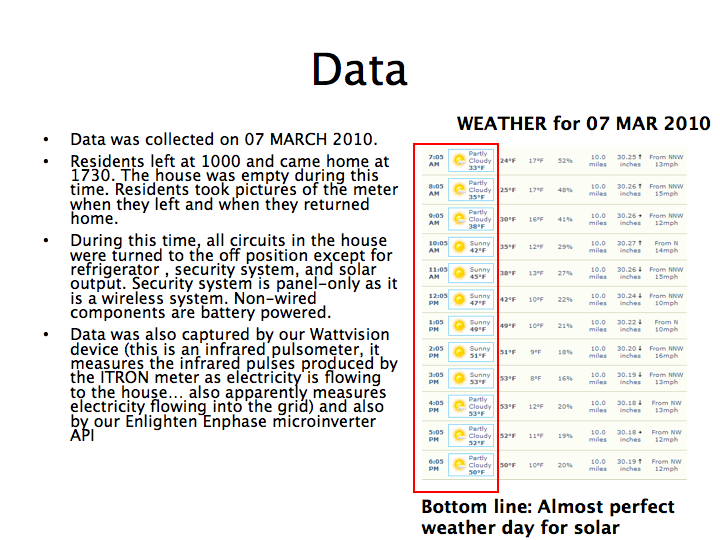 “Wattvision was able to provide me with definitive results showing that not only was my previous meter not net-capable (PowerCo had insisted that it was) the meter that PowerCo thought was ours was in fact our separately metered basement apartment. Your device's data was able to provide us with high fidelity data to show this.”

Has your Wattvision system helped keep your power company honest? Let us know in the comments. :)

Buy an easy to install wattvision system for your house, at wattvision.com.